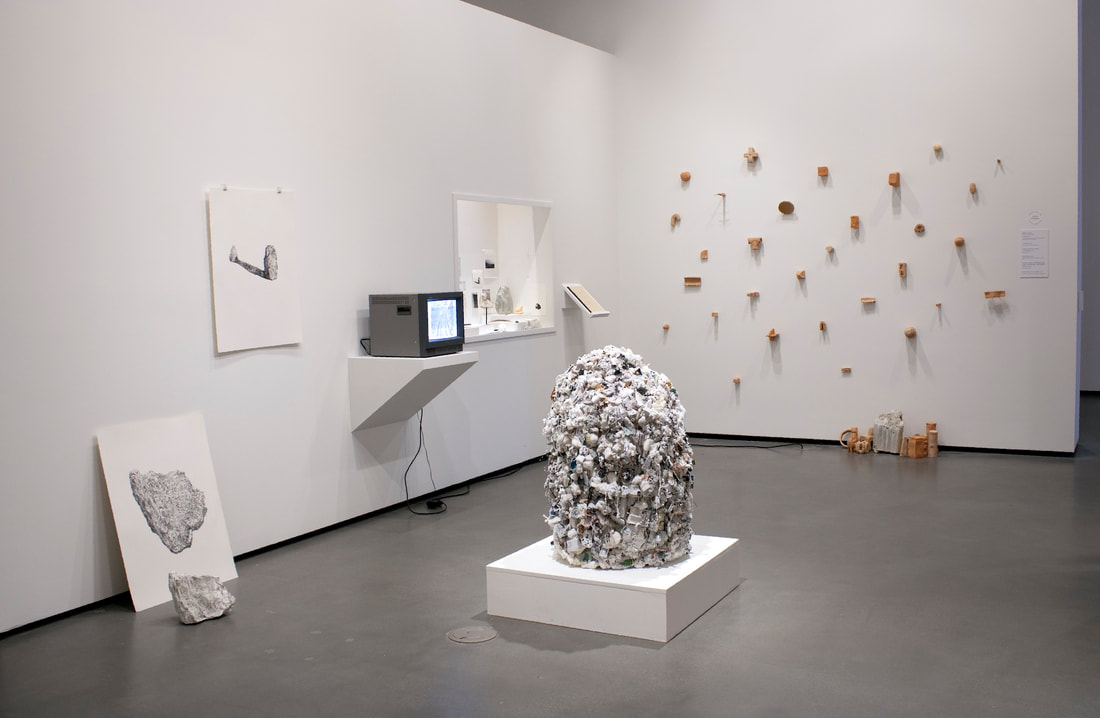 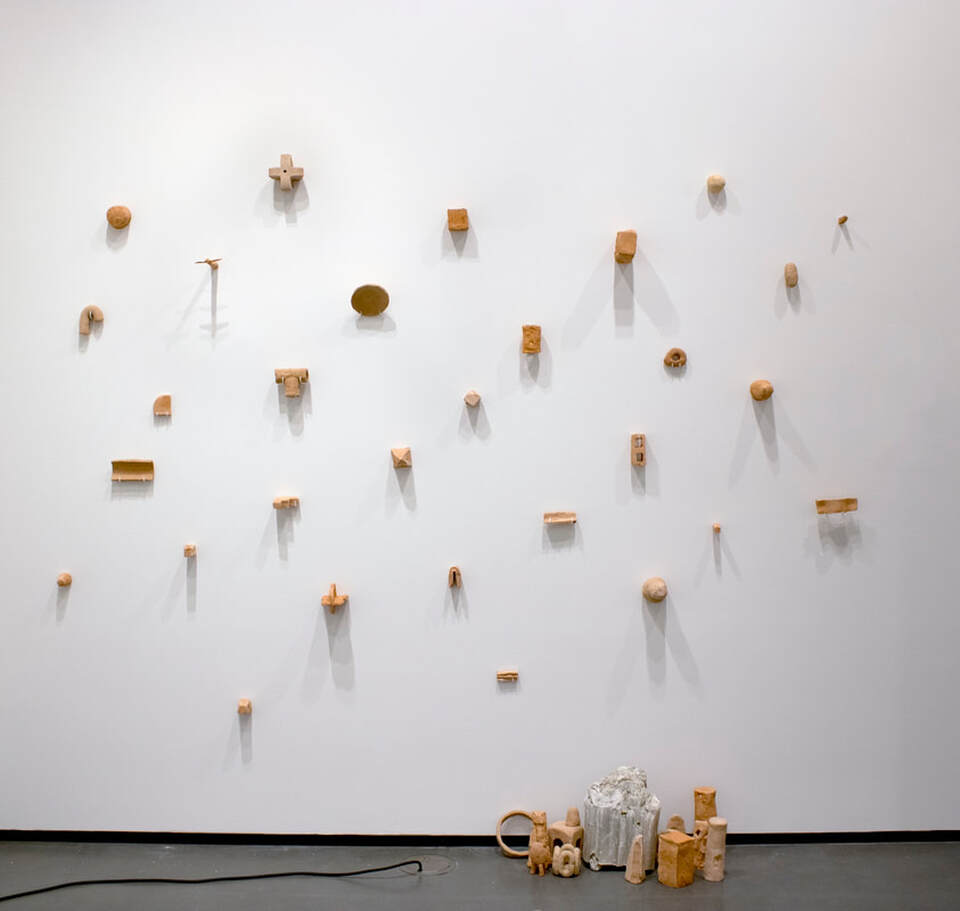 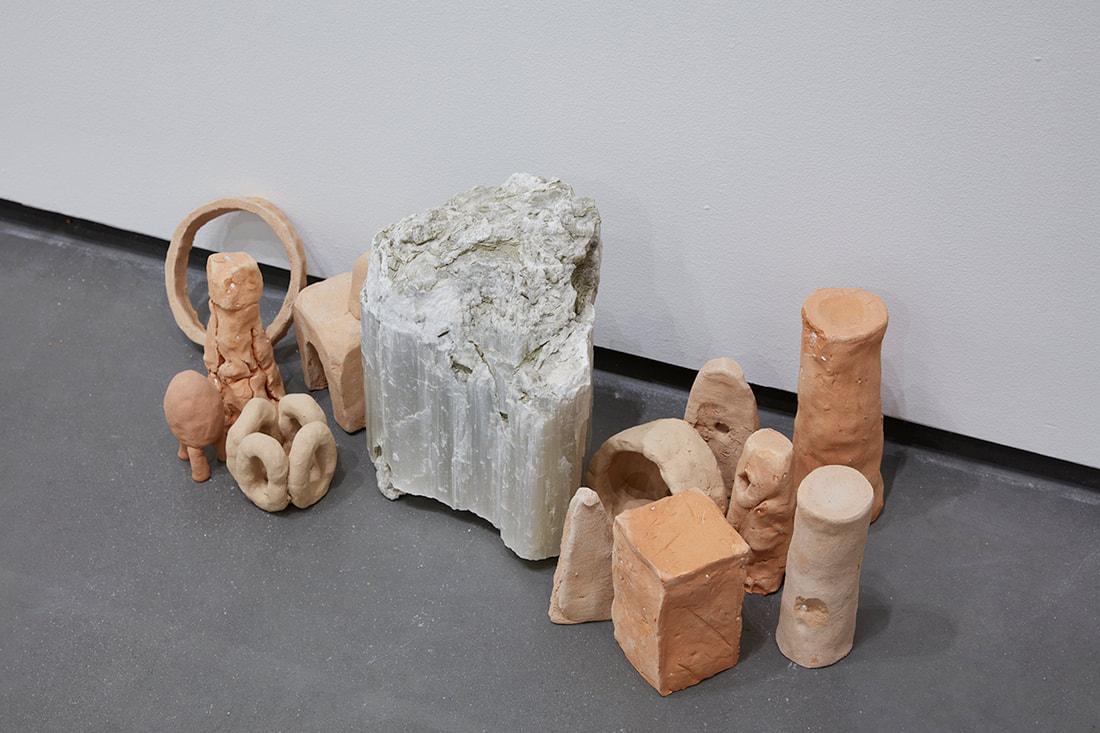 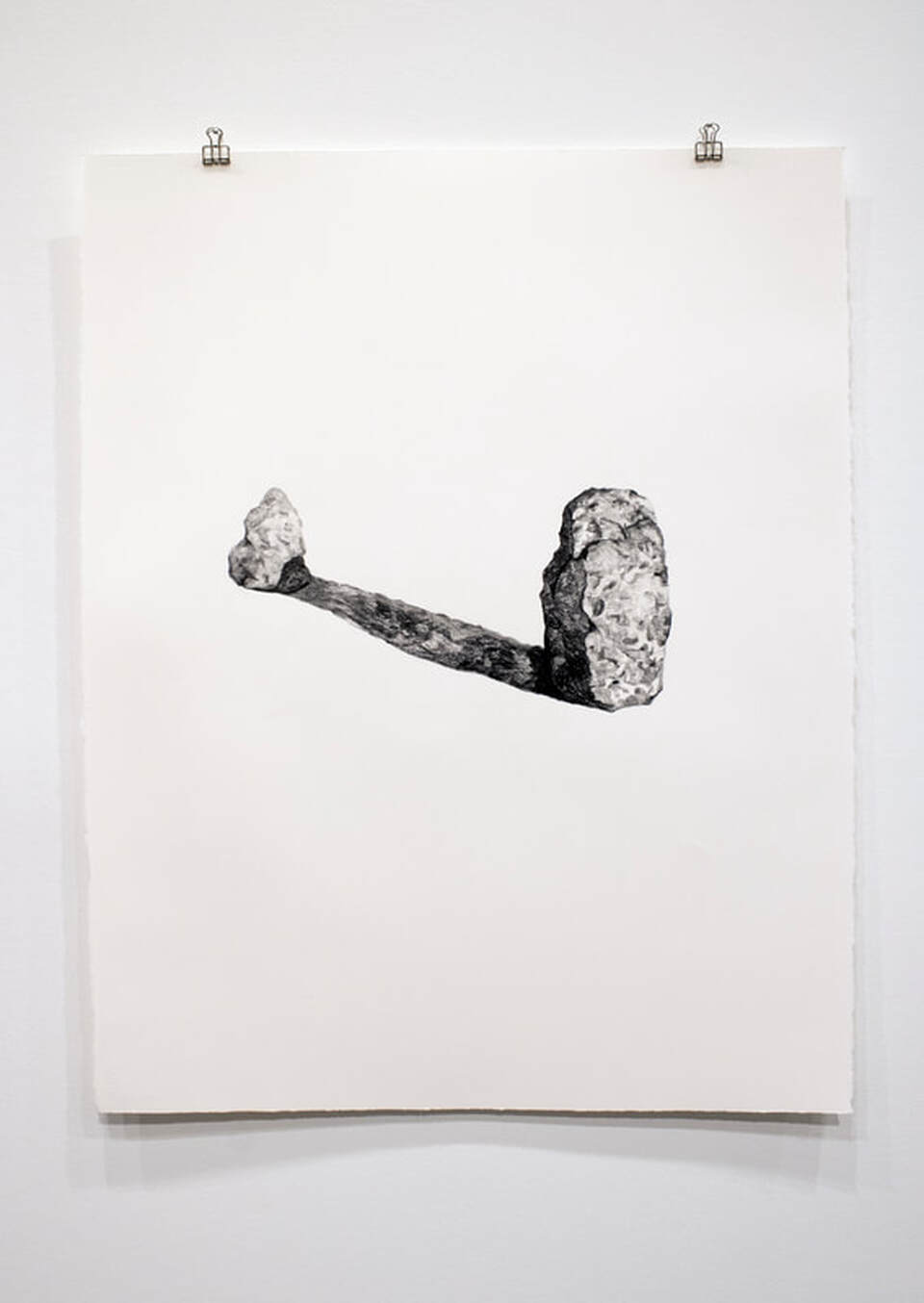 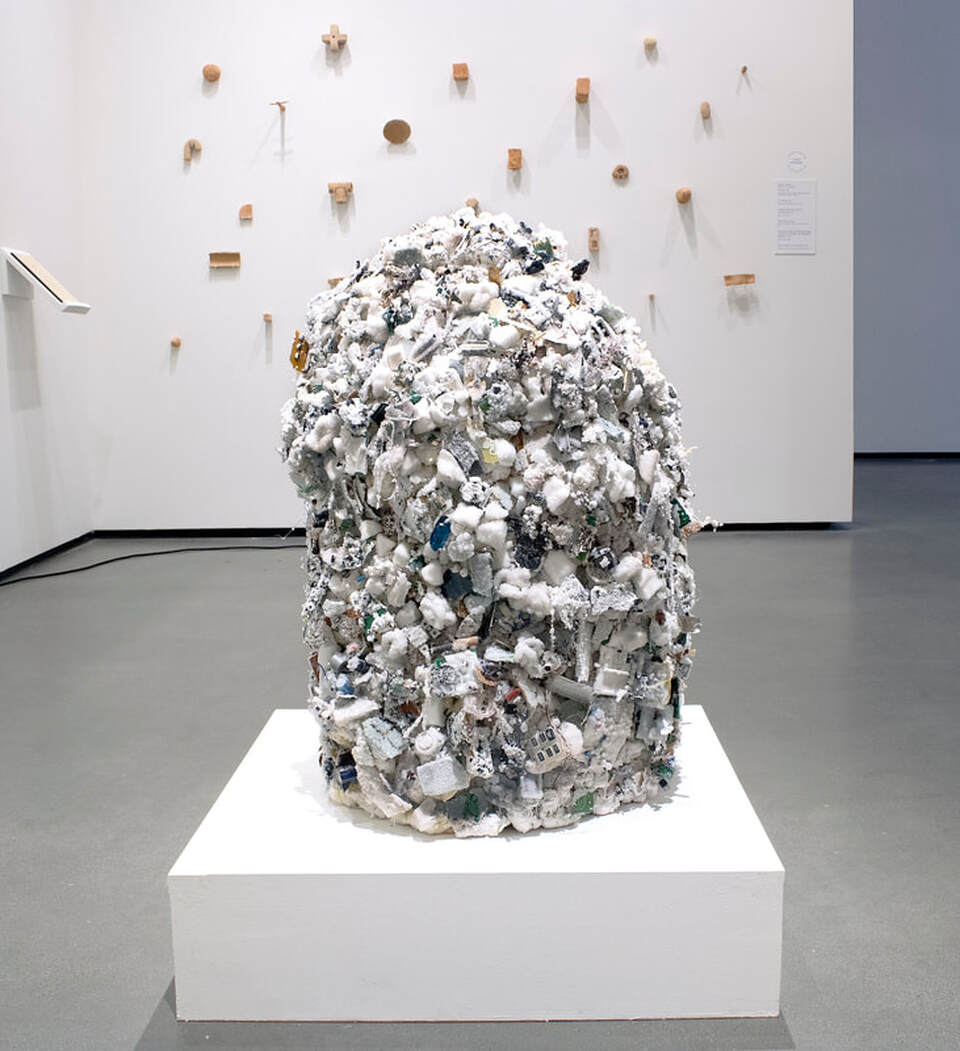 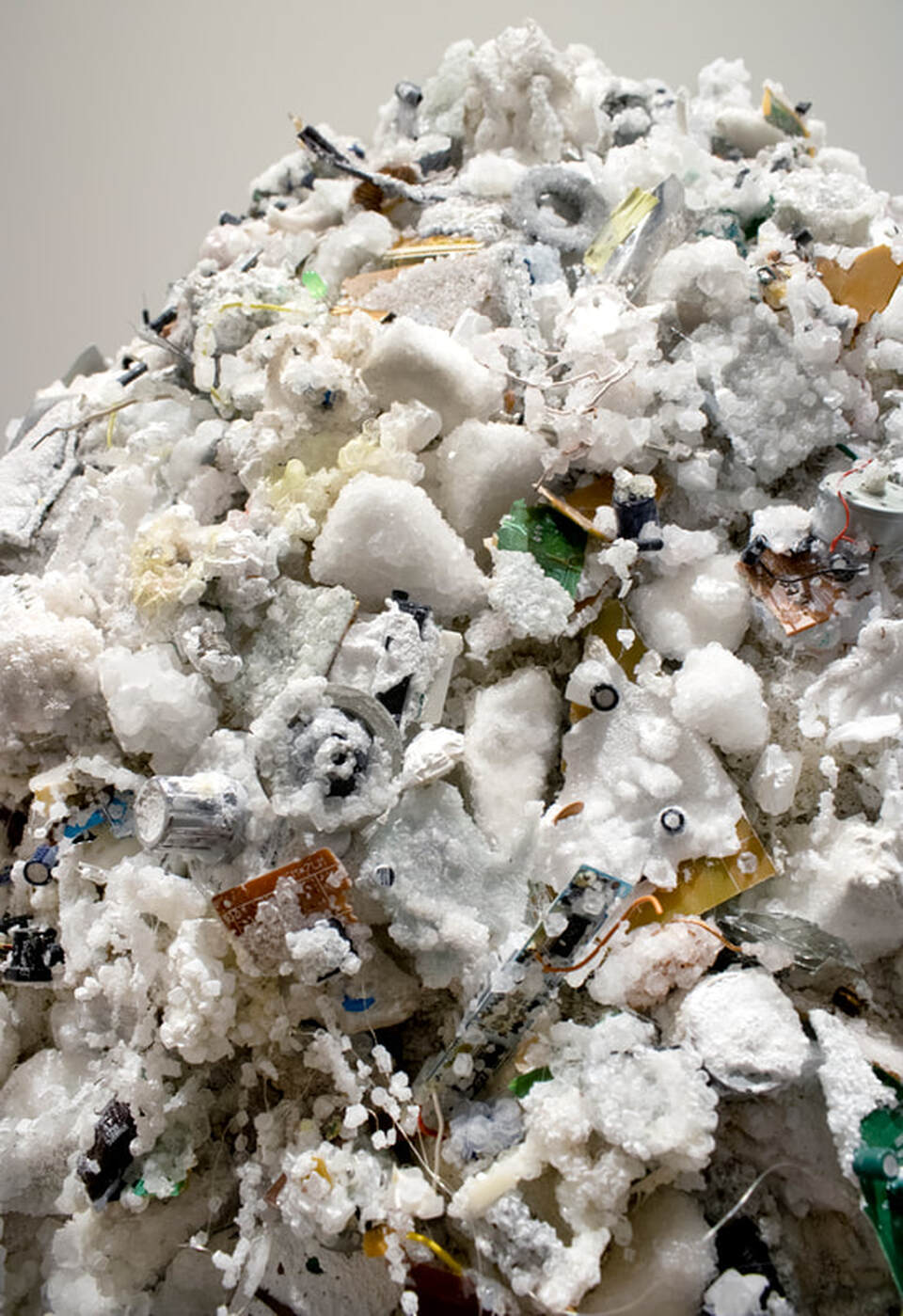 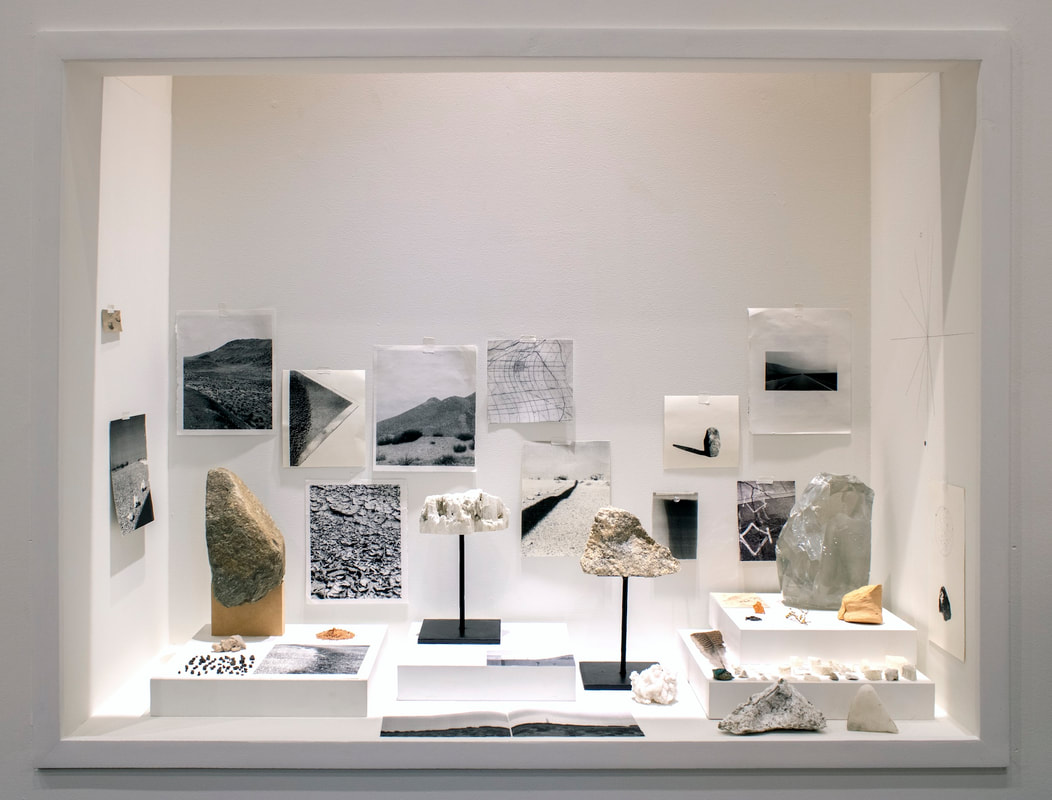 Clouds of the American West, 2022
Installation dimensions variable
Harvested clay from data center locations, ulexite, rock samples, feather, soil, xerox prints, telephone pole insulator glass, creosote, single channel video, graphite on paper, raw borax, refined borax, electronic waste
Installation photo, Graduate Exhibition, Manetti Shrem Museum of Art, UC Davis
During the summer of 2021, I took a road trip for the duration of four weeks to visit twelve data center locations, camping at or near each for a number of nights. I drove to Oregon, Nevada through the deserts of California, Utah and Arizona. Curious to experience and chronicle the emerging condition that the data center embodies, I traveled to these zones and inhabited the machine landscapes that invisibly run the modern world. I was interested in exploring these massive and energy-consuming buildings and the surrounding landscape as more than just computational infrastructure, but monuments to human knowledge in an increasingly disconnected society.

For most of us, “The Cloud” is an intangible, mystical, infinite place. Most of us don't see the underbelly or experience the internet as objects. These different objects are described in a bunch of mixed abstract metaphors that reference the landscape and yet deny any relation the physical relationship between the earth and the internet. The gap between the physical reality of the Cloud, and what we can see of it, between the idea of the cloud and the name that we give it was both disturbing and intriguing. At the data centers, I’ve found cement, metal gates, water tanks, stone, grasshoppers, sagebrush and sunburns. Inside smashed electronics I’ve found a complex assemblage of conductive materials, silicon, rare-earth minerals and sharpied handwriting from the factory. I read about the rows and rows of blinking servers that hold the contents of our overflowing devices. I learned about the millions of gallons of mostly potable water required to cool the machines each day. A dry scratching like sandpaper on my skin each time I remembered the rainless winters, and the long, smoky summers.

It was at the very edge of the continent that the internet emerged, the edge of westward expansion. The insatiable hunger for space extended into cyberspace. But that cyberspace requires physical space all around the world. This pattern of land use, on such a massive scale, adheres to the American West's signature mythology; endless horizons, unlimited opportunity and boundless freedom.
​
I collected data at these sites and along fiber optic pathways in the form of soil, clay, native, non-native plants and rocks. The information inside the giant secured warehouses seemed oblivious to the knowledge of the earth and stone they were built upon.

I felt the buzz of the electricity of the high tension wires above the fields where I gleaned the plants, thanking each and taking only a handful from a few, the way I was taught. I engaged with the cardinal directions, the sun, the stars and cell towers building sundials and marking shadows with stones to orient myself within the landscape, present time and the cosmos at large. I listened to the sound of the train as it moved and changed across the hills. Knocking metal on metal, there was a deeper sound, one I recognized in my bones to be the knocking of ancient ways of knowing out of the land.


You can read more about the project here from an artist feature with on.off-site